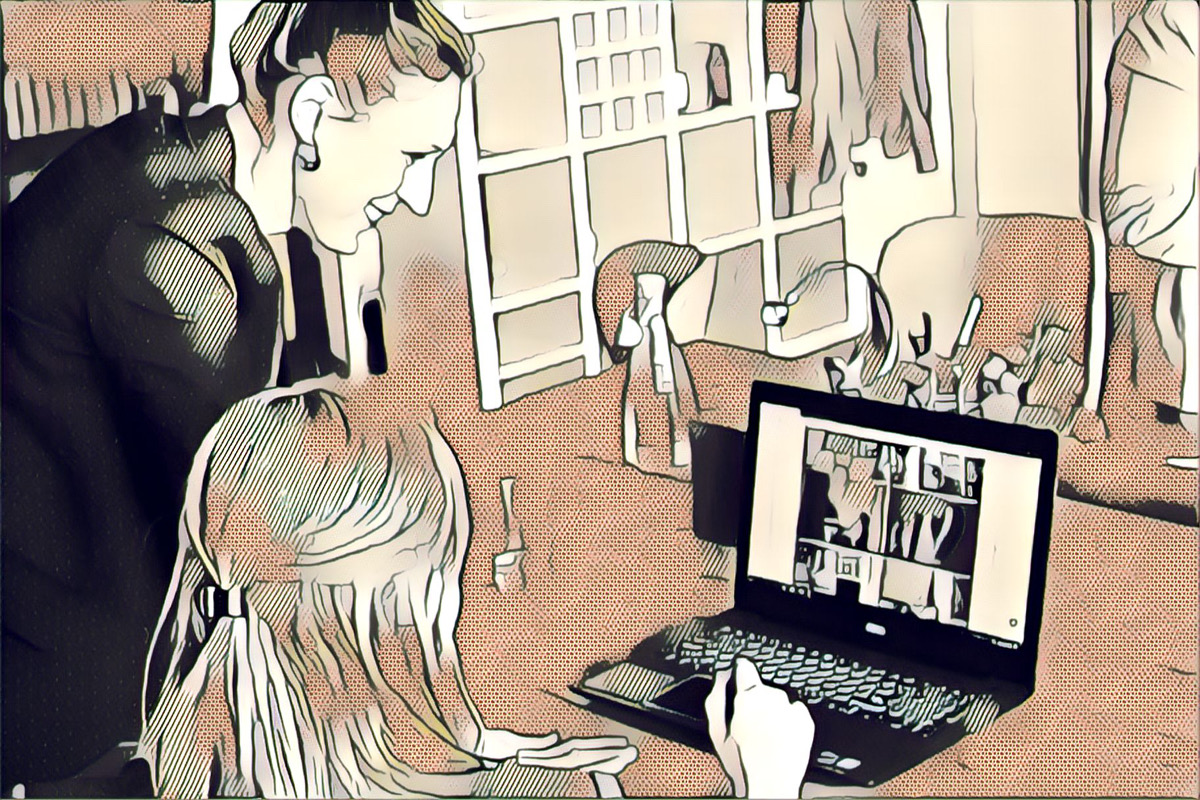 Happy (early) International Women’s Day! This year we are pleased to hear from She Listens about their film Giving Voice to Menopause with a viewing code for Chalice Foundation readers, enjoy!

Laptops and paper are strewn across the kitchen table. Outside, a clear midday summer sky stretches high above as we discuss the frustrations of the menopause taboo, the joys of our recent film success Giving Voice to Menopause and today we dream into the future of how we want to spend our time in creative nourishment and promote conversation as medicine.

We are, She Listens; Sarah Miller, Vanessa Chapple and Libby Chow. Three women who came together in 2020, during the first long lockdowns to explore negative attitudes and silence around menopause, and to make a film that sat within a larger project co-creating space for sharing and listening. Sarah is a drum maker, a writer, a facilitator of women’s circles, bird protector and many other wonderful things, Vanessa is a performing artist/researcher/director, and embodied voice facilitator and I have a background in journalism, media and film.

My own story with the GVM project began in my kitchen, just as the first lockdowns began. I experienced a large, perhaps oversized emotional reaction to my daughter asking to open a jar of pasta sauce for lunch. It had something to do with me not wanting to encourage hot lunches, as this was the start of the first lockdown in Melbourne and I was not looking forward to the prospect of the never ending kitchen carousel. I had discussed lunches with my kids, asking that we remain with sandwiches, ideally made at breakfast time, but this had obviously landed on deaf ears and so I felt unheard and unhappy. I left the house in a slight rage, and jogged my anger into the footpath and racked my brain to work out what had ignited this rage. I came back and wrote my daughter a letter outlining my thoughts on hot lunches and not being heard and then I began googling outbursts of anger in your 40s. I was 44 at the time, and I had experienced premenstrual tension before, but lately it had felt extreme. I couldn’t find anything much, until I came across an article from The Guardian from a few years before on perimenopause. I read a woman’s story about how one day as her teenage child demanded something of her, she exclaimed,

It had stopped her in her tracks this statement, as it suddenly became clear her priorities were shifting; her maternal instinct was transforming.

I related to this feeling of shifting priorities, and so I dug deeper into perimenopause, a term I’d only heard once or twice before in my life.

This was the beginning for me, learning about the multilayered, deep, dark and transitional world of menopause. One day, while walking with my dear friend Vanessa, we began talking about a play she was working on with Sarah. A play about the Greek Goddess Demeter and her daughter Persephone which explores the decent from the earthly world to the underworld and rites of passage, and for menopause there are rich lessons to be learned in this myth that have been ignored by our current cultural interpretation. But for now the play was to stay on the shelf as we gathered our creative forces to create the Giving Voice to Menopause project.

The aim of this project is to create opportunities for the diverse stories of women’s menopausal experience to be shared and heard. It is a move to inject the telling of this stage of life into the cultural conversation, to expand the field of telling of women’s experience, and to counter the harm being done when society does not listen nor learn from the wisdom and knowledge of women’s physical, psychological and spiritual health and wellbeing.

The film itself was born from numerous circles held online, where women shared their experiences of symptoms, emotional or physical, or where questions were allowed to hang in the air, to let others think and ponder without judgement, to feel safe, supported and heard.

Every time we held a circle the response was overwhelming. The hunger for conversation was almost palpable. We began an Instagram account and Facebook group, to accompany the film and immediately got over 100 members with more to follow. During the making of the film we consulted with the wonderful Jane Bennett, founder of the Chalice Foundation. Her expertise and encouragement for the project gave us energy to build upon her committed work leading and advocating for menstrual wellness over the past 30 years.

Making a film is laborious and expensive too, so after our initial generous funding from The Wood Foundation, through the Victorian Women’s Benevolent Trust, we raised additional funds through a Pozible campaign that in turn helped raise awareness of the project.

In October 2021, to celebrate World Menopause Day, we launched our film online to an audience of over 700. The response was beyond our dreams. Families were watching together, people were crying, laughing and talking about menopause! In December our film was selected to be part of the Female Voices Rock Film Festival in New York, reaching further into a global audience.

We will be celebrating International Women’s Day 2022 by sharing our film during Menopausal March, a time to reflect on Menopause.  Here is the link to our 25 minute documentary Giving Voice to Menopause

If you like, view it with a group and have your own sharing circle.

Here’s to rich conversations about menopause spreading across the lands.

Libby Chow has been working in media, journalism and video production for over 20 years.
After completing a bachelor of Creative Arts from Melbourne University she began her career at The Age (Fairfax) in 2000 as a pioneering video journalist for their national online news websites. She left her position of senior digital content producer to begin her own business in freelance media production. This choice meant she could balance her life as a mother of two, and pursue her career. Her experience as a journalist, set her up with a wide range of skills. From liaising with publicists and newsroom editors, to interviewing and filming across many genres; including the arts, business, sport, vox pops, large public protests and touring musicians. This experience with such a variety of work led her to focus on community projects, arts and not for profit organisations. She has worked with independent artists, The Brotherhood of St Laurence, Cultivating Community, CERES Fair Food, Health Issues Centre, VACCHO, Family Safety Victoria and other like minded organisations. Videobee is her one woman video production unit. She works with all stages of the process. Pre production and planning of logistics, scripting, and budget, production, shooting, lighting, sound and photography. And of course, post production, working in the Adobe CC suite, with a focus on Premiere Pro CC. Aside from her video production work, over the 2020 lockdown she has initiated a series of Zoom events on perimenopause, offering sessions with therapists and creating a space for women to share their experiences and concerns surrounding this profound time of change.