Is this gross? Part I with Lucy Peach

This week on The Leak we sat down with Lucy Peach, a self-described “folk singing period preacher”, to chat about her journey with menstrual awareness and dismantling the menstrual taboo with young people (including her son) through education around sexual health and bodies.

Casimira Melican: Hi Lucy, thanks so much for chatting to us! I’m curious to know how you became the “folk singing period preacher” that you are today?

Lucy Peach: I guess I’ve always just loved telling stories and sharing things that are exciting to me. So when I started working in sexual health education I was 27 and I had a 2 year old boy, sex positivity was starting to be a way of reframing sexual health because prior to that my role, which was funded by the Sexual Health and Blood Borne Viruses partners, was to educate kids to have safer sex so there’s less transmissions of sexually transmitted infections.

But there was no conversation around pleasure, around “how do you make sure everyone is having safe, fulfilling interactions with each other?” It was still very “disaster prevention” focussed. It’s always felt like such a privilege of being in the space of talking about sex and sexual health and bodies because its so sacred and its such a massive part of who we are. And to still have so many of these hangups about talking about things that are really normal. And if you see the way it plays out in a young person’s life when there’s shame around your body and how that’s internalised for young men and women alike, it’s such a no-brainer that if you can shine a light on the situation, give people information, help them to feel empowered and to counteract thousands of years of shit-talking around periods, you can give people this other way in of seeing it.

So this started for me when I was talking about puberty to kids and you’d go into schools and start talking and they would squeal, “Oh it’s disgusting! Oh it’s so gross!”. I saw that here was the way in and “here’s my starting point” to where they are actually at, this is what I have to work with and this can be an invitation for them to see their body as fascinating and just to be curious. So, it really just started from there.

CM: How did your work inform your life and parenting?

LP: Having a baby and that lens of coming to him with openness and curiosity and honesty and answering all of his questions was such a liberating way to parent. There was nothing I couldn’t talk about. And the great thing about having kids is you kind of get the opportunity to retrospectively relearn things yourself.

There was a time when my son walked in as I was removing a tampon and he was 3 and a half and my instinct was to say, “Get out! I’m busy!” But I was trying to be sex positive and open so he asked me, “What are you doing?”. And I said, “oh, I’m just taking out a tampon and this is one of the ways I collect the blood.” And he said, “oh yeah.” And he just sort of stood there looking at it. And I could see that he was really fascinated. And he said, “Can I look at it?” And again, I wanted to say, “No, get out.” But I said, “okay.” And he came in and he had a good look and then I’ll never forget, this was probably a pivotal moment, he said to me, “is this gross?” And he was reading my face. So he was looking to me as to “how should I feel about this thing?” He knew it was powerful, he knew it was something “big”. And I just said to him, “No, it’s not gross, it’s actually amazing. You know that little mess that I told you about that comes every month? If I want to, I can grow a person inside of myself.” And his face just lit up and he said, “that is so cool.” And I thought, “it would be SO easy to just say ‘Get out! This is Mum’s private time.’” And I guess because I was so lucky to be supported in what I was doing at work, working with him was such a huge experiment.

And now I have a 15 year old boy who will say things to me like [while I was editing my book Period Queen], “Come down to the river, come on! Come with me.” And I said, “No, I can’t, I’m editing, I’m busy.” And he put his hand on my shoulder and he said, “Mum. I know you’re Day 1, I think you’re burning the candle at both ends.” And that’s just normal for him. It’s not like we always talk about my period, I feel like I’m a bit of a hippie/witchy kind of person but not really! It’s a normal thing in our family to just be able to say where you are and what’s going on for you and how that’s making you feel.

Next week we will publish Part II of our interview with Lucy, talking more about the myriad ways she is spreading the word on menstrual awareness and dismantling the menstrual taboo through various artistic mediums. 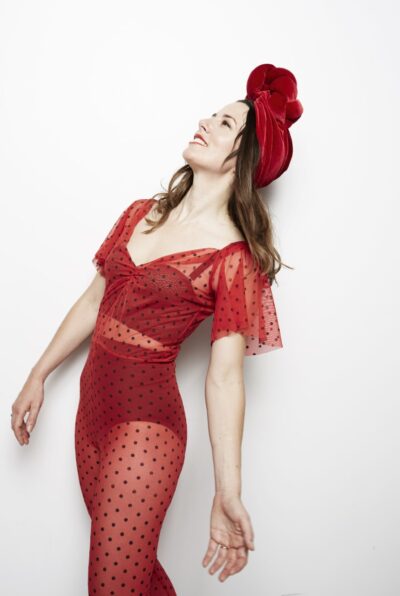 Lucy Peach is a folk singer and sexual health educator from Fremantle, WA. Inspired by Bob Dylan, Stevie Nicks, her menstrual cycle and her convict ancestors, she has released two EPs: ‘Wax and Wane’ (2011) and ‘Silver Tongue’ (2016) and is mid way through recording her debut album ‘Blood Magic.' Lucy hosted podcast Period Queen released in 2020.